Brief bug summary:
Monster attacks that deal multiple lines of damage fails to trigger invincibility if the top line out of all the damage line is a miss/guard. This leaves character to be vulnerable to get hit by more attacks than intended leading to death if the player is unlucky enough to have all of the top line of damage to be guard/miss in a short time span. For example if 6 monster attack at once with their multiple damage line attack, and the top line of each attack is a miss/guard, then you will take damage from each and single one of those attacks at once. 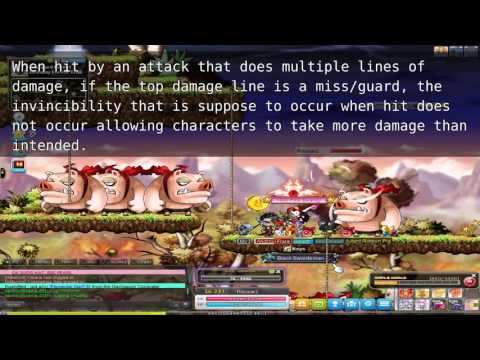 Steps to reproduce:
Get hit by a monster that deal multiple lines of damage in one attack (example of monster shown in video are Advanced Knight A, Official Knight D, Mutant Ribbon Pig, Reindeer, Ghostwood Stumpy, ...)
"+% second invincibility when attacked" potential is optional and not needed to see the bug on a brand new character.