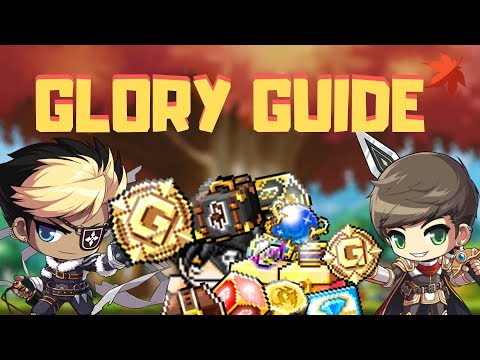 With Glory's event just started, and a 13 hour maintenance finally concluded, I figured I would make a video
about this event. Welcome to the much awaited Glory update, this update features the story after the black mage's defeat, where we will become part of the Glory Guard to rebuild Maple World. With a coin shop that rivals that of the black mage and adventure island event, you can definitely expect there to be alot of items that will prove helpful to all characters. We're going to be taking a look at the events and quests that are going on right now, we'll also be taking a look at the coin shop, the different ranks, and the different ways you can get glory coins!

So right off the bat, to start the Glory event, you`ll need to start the Glory Aftermath quest, this quest has a small cutscene that you will have to sit through,but once its complete, you will gain access to Outpost, and more importantly, the Glory Event itself! By finishing this quest you also automatically complete the pregistration for this event, and will recieve rewards when the glory pre-registration ends on december the 4th! These rewards include a VIP Royal Face and Hair Coupon, A super rare royal style coupon that actually allows you to pick what you want! And if you were here for the Black Mage event, you will also receive a Glory Guard Coin box and 2000 Glory Coins! What's really cool is that only one of your characters will need to sit through the cutscene, and any other character you want to participate in the glory event on will automatically complete the quest
without the need to watch the cutscene. I reccomend part taking on this event on atleast 2 characters, more on this later.

The Glory Coins will be needed for purchasing goods from the Glory Event Shop located at the Outpost, and for ranking up! Taking a look at this shop, this shop is insanely good, I'd argue that it's even better then the black mage event! Even in the lowest rank shop, there are still some absurdly good items, like the 40 slot chair and soul bag, daily hyper teleport rocks, and monster life gems, something that is normally only available through the cash shop! And in the higher up ranked shops, you can see that there are items that are absurdly good, like Miracle circulators, Red cubes, black cubes, Mitra's flame and cube boxes, NX equips, Black rebirth flames, a typhoon growth potion, the list just goes on with how many awesome items there are! These parts of the event shop won't go live right away however, just like with the black mage and the adventure island event you will actually need to build up coins and purchase the rank ups in order to gain access to more of the event shop.

These rank ups also won't become available right away, but will become available as we continue to participate in the event. Upon earning these rank ups, you will increase the amount of coins you will be able to get daily and also get bonus passive stats. Scout is the starting rank, and is available to everyone, with a daily coin cap of 120. The sentinel rank will be available on december the 4th, with an upgrade cost of 300 coins, a daily coin cap of 150, and a passive damage increase to normal monsters by 30%. Guardian will be available on December the 18th, with an upgrade cost of 800 coins, a daily coin cap of 200 and ontop of the 30% bonus damage to mobs, you also get 100 all stat and 5000 health. Master will be available on January 1st, Commander 1 week later, and Justicar on January on the 15th! Justicar will be the highest rank available and will go on until the glory event ends on January 28th. The amount of coins you need for the early ranks is easy, but high ranks like Commander and Justicar require 2000 to 3000 coins. The full upgrade from Scout all the way to Justicar will cost a total of 7600 coins, so you'll definitely want to take advantage of everything, which include the ways to get coins beyond the daily cap! Allow me to explain, meet NotaPancake, this is my night walker and my second character that i will be doing daily coin capping on. My main objective is to get him to atleast 7600 coins to purchase all the rank ups when they become available. My Shadower will be used to purchase as many goods as i can because it's obviously my main
character. The coins you obtain on both your main character and second character are bound to those characters alone, but the rank ups are different story, they are shared within your world. Which means if i purchase a rank up on my night walker, my shadower also gets the benefits! This strategy will allow you to have more coins to work with when you decide to spend coins in the higher rank tabs!

Currently the only way to obtain Glory coins will be to do the basic mission, you`ll be requested by Neinheart to use a marble item in a field and hunt monsters near your level for lost supplies. Lost supplies can be transferred up to a stage of 10. The more stages you clear, the more points you`ll get. This will be one of the only ways to get coins until December the 4th. Kishin, Frenzy or the Fury totem will help out tremendously. This basic mission will only be around until december the 4th. And on December the 4th, this basic mission will be swapped out for Shattered Dimensions, and Unstable Barrier. Alongside the Basic Missions, Challenge missions, Weekly missions, and the Drill Hall will become available. The Drill Hall will be an AFK zone, allowing you to AFK for EXP or Glory points by using a skill found in the beginner tab. You can only enter this place upon reaching Sentinel rank, which isn't too big of a deal. Challenge and Weekly missions are going to be your 2 ways of obtaining coins beyond the daily cap. The challenge mission is called Enchanted Golem Training Grounds, and will require you to defeat Enchanted and Mini Golems in 2 minutes to obtain Glory coins. There are total of 10 stages, and when you defeat all golems on the map, you will proceed to the next stage. You`ll be given Glory Coins according to how well you do on the challenge mission, and if your not satisfied with your performance, you can choose to retry the mission until you are, and wish to claim your reward! The Weekly mission is called Investigating Anomalies. Upon starting up the quest, you will gain access to the weekly mission UI, which will show the location of dimensional rifts, upon going to investigate, you will find a portal where the rift is created and you will need to enter, defeat and clear all monsters and stages. Upon completing the final stage, you can recieve rewards from the weekly mission UI. Danger Zones have a low chance of appearing, which will give 5 times the Glory coins and EXP. And within those danger zones, there is a low chance to encounter Disorder, and by defeating this monster, you`ll be able to bank 500 million mesos! Do keep in mind that you can investigate 30 dimensional rifts per week! So plan accordingly. Also Do keep in mind that Challenge mission rewards can only be claimed on one character per world daily, and that the 30 weekly missions are shared within your world, resetting on Wednesday at reset!

Along with these missions going on for the Glory event, we also have a couple of other things worth doing alongside Glory, Maple Relay is making a return, which means it's time to farm Reward points. Upon accepting the maple relay quest, you`ll be able to recieve daily rewards based on how long your logged in for. You can get up to 1700 maple reward points everyday, which is pretty big, and doing this for multiple days will also net you some nice rewards like Glory Coins, a pack of 12 black cubes, and even maple points! Additionally, Tera burning is also making a return alongside Extreme Breakthrough, but do keep in mind that Ho young will not be eligible for this event, I would still reccomend making a character for this, as the Extreme Breakthrough event features some really nice rewards, like maple points and a unique emblem. Consider tera burning a character you may want to play as a second main. As this is surely to give them a major boost with the free gear and Nodestones. Ho young is also arriving on December the 4th, and if you are so dedicated to reach level 250 with it, you will be rewarded with a box that contains a legendary potential, 15 star , 30% traced Arcane Umbra Weapon of your choice. Do keep in mind that the weapon the potential on the item is fixed to the % damage boss damage and crit rate lines that it comes with! And just like always we do have sunny sundays coming up, so consider saving up your mesos and glory coins for December 15th, as that day features a 30% off deal for the coin shop, and a 5,10,15 star force event. Remember that you will need to re-open the relay window by binding it to a key for your keyboard shortcuts


For the first 2 weeks of this event there won't be that much to do, but once December the 4th comes around, there will be a lot more activities and missions
to do. I would reccomend getting Tera burning out of the way as soon as possible so you will be able to focus on playing Ho Young on December the 4th,
and remember that getting your Hoyoung to 250 will reward you with an Arcane umbra weapon box that is transferable within the account. And with the new 5th
job skill and explorers finally getting their own link skills, it seems we have a bunch of new toys to play with in this upcoming month for Maplestory!
Sign In Register
Follow us on