So, lets talk about what's bad about beast tamers. The most common thing I hear about bast tamer is how they are a weak class and have no damage - this is only partially true.
It's not necessarily that the damage per line is weak, it's the lack of lines.
- Bear mode actually has decent damage per line - the thing is bear mode doesn't do many lines. Fishy slap only does 1 line and furious strikes only does 4 lines. not to mention they are slow (another issue i'll get to).
- Leopard isn't quite as strong as bear (maybe like 75% as strong) but i feel it has the lines. if leopard was as strong as bear i feel it could be decent.
- Hawk mode is the one i see brought up often. While hawk mode is absolutely atrocious (literally does 0 damage, like 10% the damage as bear) don't let it be the impression of beast tamer as a whole. Hawk does actually have some good points (which i'll get to later).
- And then there's cat mode, which IMO is like a decent bishop. The damage isn't terrible (like 50% of bear) and the buffs are quite nice (but not as strong as bishop) but it does lack lines as well. (again, will get to later)

So let's start with beast tamer as a whole, the big thing that needs to be reworked is skill cast delay (my god is it terrible). A big example being the level 170 hyperskill - it takes like 3 seconds to "charge" it, 3 seconds to use it, and like another 4 seconds to finish it; keep in mind there are no iframes, you take damage the whole time. In what way is this skill possibly useful!? What's worse is the damage only takes like 3 seconds to apply, you finish doing damage halfway through the animation. let's also go ahead and mention that beast tamer does not get the skill "echo of hero"

Now, we'll get to bear, I feel the damage per line on bear is fair (paw swipe does 400% + 50% from furious strikes, majestic trumpet does 210% + 140% DoT with billowing trumpet, furious strikes does 275%, fishy slap does 480%, table flip does 500% (those are the main skills)) , but lets talk about what can be changed to add better lines and more mobility.
- First, I would improve furious strikes. I would make it a standalone skill, and lower the cast delay. A lot of people say to make it move-able, which definitely would be nice, but i feel isn't necessary. Maybe if it had a few more lines, was its own skill, and had a decent cast delay I can almost see myself jumping around and attacking with it, similar to a nightlord kinda maybe. (Don't forget to give it its own node)
- Second I would improve fishy slap. This is definitely a useful skill IMO but it could be better, If fishy slap was changed to be more like phantom's tempest (3 lines and move-able) I feel it could be a good source of mobility for bear. being able to move and attack in bosses is nice - something bear can't do currently.`
- Last i would improve table flip. While the concept is nice (give the class a full map attack like most), its cast delay is to slow; it should be changed to have a delay similar to others (blizzard from I/L mage comes to mind). Would definitely make it more usable.

Next, lets talk about leopard. While I can't list actual damage numbers anymore, ( i took my Sp out of leopard and put it into hawk) I can say when I used leopard, I did about 75% of what I was hitting in bear. If leopard damage output was more similar to bear - say, 80m/line on bear to 80m/line on leopard - it would definitely be more useful. I feel the class has enough mobility and lines to be good, just it can't produce the damage. The only skills I really think need a change are three point pounce, and party time.
Three point pounce has, what i think, is a stupid cooldown. It's 2 seconds, like what's the point? It's low enough to where you can spam it, but it's a cooldown so you can't spam it. I think it should have no cooldown, it's a really usefull and good skill, just the 2 second cooldown ruins it. The second skill, party time, is similar to table flip. The cast delay just ruins it, it needs to be lowered.

Now we'll look at hawk, I don't even know where to begin, seriously. Let's look at the good parts, hawk has some of the best mobility in the game. Eka glider is an amazing and fun skill, and vertical draft / double flash jump is great. I do tend to use eka express as a return to town, and it's fun to fly in town. But as far as attacks go, SMH

Honestly, i never really used Hawk for attacking, so my knowledge is quite lacking. Just, for god's sake, INCREASE THE SKILL% 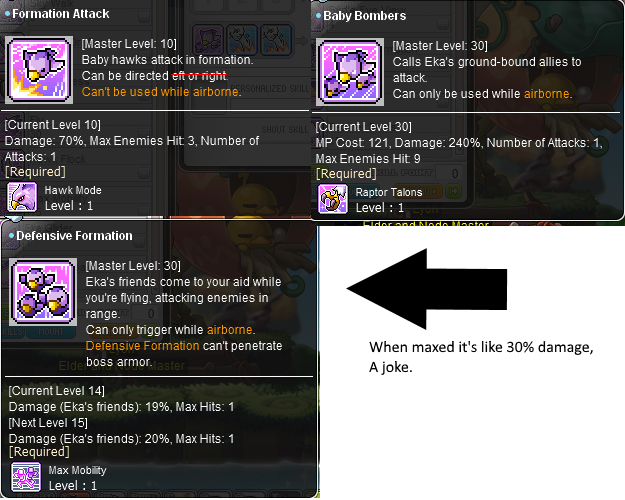 Second to last is cat. While the buffs are decent, they're not as good as a bishops, and the attacks are pretty lame. The damage % isn't too bad (300% for maxed fire! kitty) but it's only 3 lines and isn't that quick. Not a whole lot to say about cat tbh. A few things would be to A) change meow blue card. it gives flat DEF, like wtf? who even uses DEF. it should be changed to something more useful, like IED% or boss% or maybe even buff% (is there a buff% buff?). B ) change friends of arby to be 50% like Hs. Right now it's only 30%, which, when it comes down to it people would prefer a bishop instead. and C) what does the final skill even do? It's completely useless (I think it's broke? no idea)

And last, we have 5th job. First, is chump charge, which, is just awfully executed. I get what the devs were trying to make, but it's just terrible. The whole 'combo" thing is annoying, the damage sucks, and half the time it doesn't work right. Imo to make it better, the "combo" should be taken away and the damage should be increased to be similar for each animal. I will say, cub calvary is like a godsend. Hands down it's the best skill beast tamer has, I love it to death it literally increased DPS by like 2x, probably even more.
Let's also mention boost nodes, they're absolutely terrible. First off, all the animal skills are mixed together, so half the time you get a node where it has 2+ animals on it which makes it a pain to find a decent trio, let alone a perfect trio. if i were to redo them, i'd make it so nodes only use 1 animal (I.E. you select a bear node, only bear skills, etc. etc.) Second, the boost% should be changed. For other classes, first job skills get like a 7% increase while 4th job skills get a 2% in crease or something. beast tamer on the other hand, all nodes only get a 2% boost. I can understand why it's like this (no set job ranks; 1st job, second job, etc) but is it fair? Also, lets mention there's a boost node for deep breath, AND really deep breath. Literally really deep breath is the SAME SKILL just higher skill damage%.

Well, this was my report on beast tamer. I mainly use Bear for attacking, cat for some buffs, and Hawk for the mobility, so i wasn't super knowledgeable on some things, but based off of my experience these are some changes that would be nice to see. I also think it would be nice to be able to use skills from all animals at the same time. This would also add an increase to mobility/mobbing/ and stuff. I guess it would clog the keyboard pretty quick, but I can see it being useful in somewhere like bosses where you're attacking with bear, then use a leopard skill (probably thunder dash) to move away from the bosses attack. Could also be quite useful in mobbing. Maybe have it to where you choose a main animal mode (for passives and stuff) then have it use skills and buffs from other animals (actives). this could also save 4 keyboard layouts which, with the amount of skills Beast tamer has, would be useful

Also, if beast tamer could keep the most recent animal mode after death that'd be great, it's pretty annoying in bosses. (i have a post about this already).