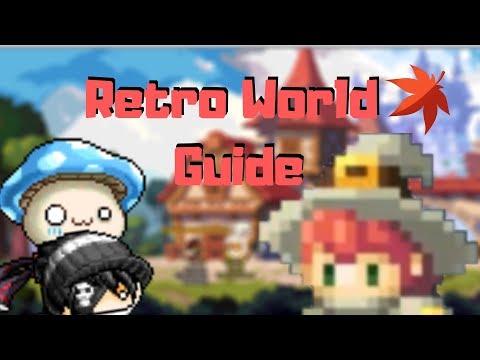 Hey guys, LeWaffles here, Welcome to another maplestory guide. Today were going to be talking about the event where Nexon
shows off their talent with pixelart. This is the Retro World Event. This event is all about blasting us back to
the 8-bit era. With very simple and strait-forward minigames to participate in, it's very easy to part-take in this event
alongside doing your dailies in the arcane river. Taking a look at the shop we dont really see that many thing that are of note
for established players, however, if you take a look from a new player's perspective this event is actually extremely useful,
the coins are not that hard to build up and to top it off, we see alot of items that are fit towards new players. Like the
Retro World Potions. Just like with the Utah's Farm event, were going to go over everything that this event has to offer, along
with the fastest way to cap your coins, additionally we`ll also look into Jump Training and Dodge Training.

So if you have been doing the event, you may notice that you can only get 200 retro coins a day, which translates to 2 thousand
retro points. We'll need to know how many retro points we have for two quests. These two quests are the Retro World Champion
Dodger and Jumper title, you`ll need to finish these to quests by accumulating 20 thousand retro points in total. By completing
these two quests you will gain access to challenging the Demon King Tower dungeon. This dungeon has 5 stages in total. The first
4 stages are 5 floors each are obstacle courses with you needing to move your way through the tower. One you clear all the way
to floor 20, you will gain access to fighting the Demon King on Floor 21, by defeating the Demon King, you will obtain the Retro
Hero Medal. So obviously there are a couple things to note about this medal, and probably one of the most obvious is that it is an
event medal, meaning that it has a set duration for it's stats. In our case, the Retro Hero medal will be give to you when you defeat
the demon king, and the stats will expire after 30 days. But oviously the medal is only one side of the event, so let's talk about
the ways you can get retro coins

So we got about 6 different ways to accumulate coins but as of right now, only 3 of them are available. The first way for you to
gather coins will be through Magician's Dodge Training. This minigame is all about movement. Navigate your character to dodge
fireballs and collect silver and gold coins along the way. However don't wait too long, because if your too slow, the coins will
despawn. Couple of notes with this minigame. The pattern of the fireballs is the same every time you do it. So you can use that to
your advantage to understand whats coming up. You also don't have to directly avoid the fireballs too, if your positioned
correctly, you`ll be able to hop over the fireballs or if the small fireballs are moving horizontally, you can also duck under them!
Prioritize living to the end over collecting coins, because when you come down to the last 10 seconds or so, you`ll be able to hit
the jackpot,and grab a ton of coins. Ideally, the most coins that you can get from this minigame is 25 coins each run.


You know what I love, Jump quests. Not really, but this minigame does teach players how to position your character correctly.
Enter Mercenary's Jump Training, this is the second minigame that you will be able to play. This
minigame requires you to judge between two different types of jumps, between a short and a long jump. Just by taking your time
and looking carefully at which jump you need to perform, this will be a cakewalk. The farther you go, the more points you`ll get.
It is also worth mentioning that there is an end, and just like in Dodge Training, making it to the end, rewards you with some
sweet retro points. Couple of things to take note of here, when you obtain a coin, you`ll receive something called Input Delay.
For some reason, picking up the coin will delay your movements and you`ll perform your desired jump way later then you expect.
To fix this, anytime you pick up a coin thats on a small platform, i'd recomend that you let go of the arrow keys for atleast a
quarter of a second before continuing, this allows the game to catch up with you, and you wont find yourself falling for a
careless reason. Ideally, the most coins you will get from this minigame will be 15 per run. Taking this into consideration,
we`re looking at a approximately 80 coins, if you perform these two minigames perfectly.

However, its obvious that 80 coins is not the cap. So your going to have to resort to the other way to cap coins. As of right now,
the way that is available is called Promote The Game. By accepting this quest, you`ll be able to hunt monsters near your level for
Retro World Promo Coupons, their drop rate is definitely not common, but its no where near nodestone levels so were fine.
Just like with Utah's Farm Event, the more monsters we`re able to eliminate, the faster we can collect coupons. You can collect
up to 40 coupons a day, which is enough to get you to daily coin cap. With a frenzy totem or kishin and drop gear, it's very easy
to see yourself finishing within 20 minutes. But LeWaffles, if you can cap coins just by doing Promote the Game, why not just do
promote the game? Yes this is true, It is the ideal way to cap coins, however if you are wanting to go for the Retro Hero medal,
you will need to gain access and conquer the Devil King's Tower, and to event gain access to the tower, you will need to do the
minigames for a couple of days. The way I recomend you to cap coins right now, is to do the two minigames and then finish the rest
with Promote the game.

Now if some of you have noticed in the patch notes, you may have found out that Promote the Game is only going to be here from the
6th to the 12th, after Promote the game is finished, a new quest will emerge, which is called Eliminate Bug Monsters, and this quest
will be in effect from the 12th all the way to the 26th. Now as of
this recording, the event hasnt gone this far yet, but we can definitely assume it's going to be a substitute for Promote The Game.
Your job is to hunt down bug monsters that will appear in the map while you hunt monsters near your level. Once, you defeat 40 bug
monsters, you will gain a Retro World Coins Box, which will grant you some coins.

The second last way for you to be able to grab coins will be available on the 26th to the end of this event on April the 9th, and
just by reading the patch notes, we call on the power of the Goddess to help you earn Retro Points. Obviously this is a substitute
for the Eliminate Bug Monsters, but what's even more obvious is how similar this part is to the Super Lucky Pig from the Utah's
Farm Event. I mean cmon, you even get the 50% bonus EXP for the monsters you kill. Oviously with how flashy the Pig was for his
FMA, we`ll definitely assume were in for a surprise when this part of the event goes live on the 26th.

The last way that we're going to be able to get retro coins is going to be from the Devil King's Tower, and as of this recording,
you should be slowly making your way to gain access to this place by doing the Dodge and Jump training. This tower sort of has a
similar lay out to the Tower of Oz, there are a total of 21 floors, and there are 5 checkpoints. They are at floor 1, floor 5,
floor 10, 15 and 20. These floors seem to act like resting spots, which is really nice. You`ll need to climb the tower, defeating
enemies in your way. You can also earn Retro coins by eliminating monsters and opening treasure chests inside the Tower. At the very
top on floor 21, we have the demon king, and in all honesty, his attack patterns are very simple to understand. If you have a
little bit of experience fighting Lucid, this guy is gonna be a pushover, and even without bossing experience, his patterns are very
simple to understand, and even if you fail the stage, well... Bash your head against the wall and it`ll break eventually right?

I mentioned at the very beginning of the video that from a veteran player's standpoint, the event shop is actually pretty weak.
There aren't that many items that have got player's attention, and the items that do have player's attentions are just the
Arcane Symbol and Nodestones. However if you take a look at this event from a new player's point of view, this event is actually
pretty nice. One thing I like about this event is actually how simple and quick it is to accumulate coins. Additionally, the town
chief Emeric, also sells up to 6 level up potions every week to help players from level 100 to level 200! There's also a portal on
the very left for a hunting ground that will be available on the 26th that allows you to pay retro coins to hunt special monsters.
Additionally, we see alot
of items that are generally more suited towards new players like the Character slot expansion coupon and alot of enhancement items.
Additionally, with there being a double limit on Retro coins every sunday, but on March the 17th and April the 7th, we can see that
there is a 30% off for the shop. While this event may be a throwback to the 8-bit days, this event also is extremely helpful
with improving on your basic controls in the game, which can prove extremely useful in the later stages of the game, where movement
and positioning is basically required in order to stay alive in boss fights!
Sign In Register
Follow us on