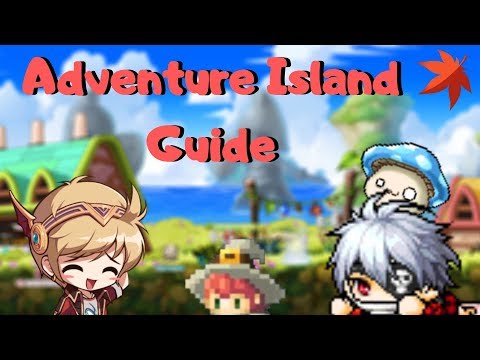 Welcome to another Maplestory event guide, today we're going to be talking about the event that is currently going on right now and trust me, your probably gonna be wanting to know a bit about this event, because this event is not your normal 1 month event. As a matter of fact this event goes on for a bit over 2 months, which is quite a noticable difference compared to many other events we've had so far. Welcome to the Adventure Island Event. This event is in all honesty one of the best events this year by far, not only do we have an event shop that rivals the black mage event, but we also have ways to obtain event coins BEYOND the daily cap. Which is pretty rare! Additionally, not only are there many different ways to cap coins but this event is one of the first event to have an increasing coin cap as we continue to participate in the event! While this event is still pretty fresh out of the box, we're still going to try and go over everything that this event has to offer!

Taking a look at the shop, well, we can't really see the full shop in game unfortunately but we do have the patch notes, and taking a look at the patch notes, we can see that this shop is definitely one of the best so far, and I would go as far and say that it's just as good if not even better then the one that was featured in the black mage event. This event shop contains a bunch of exceedingly rare items that are not available in normal events, like Typhoon Growth Potions, 40 Slot Chair and Soul bags, Red cubes, Black cubes, and even Black Rebirth Flames. One thing that should also be noted here is that just like the Black event, a couple of these items are limited per world, this means that if you buy an item like the typhoon potion, you will no longer be able to buy it on another character. But how do we actually purchase these items?

Well, the Adventure Island event features a rank up system, where if you have enough coins, you will be able to purchase a rank upgrade! Keep in mind that these tiers are not available as of this recording, but they will slowly become available as time goes on. We start off as Tenderfoot, as it is the free rank and the lowest rank. Scout rank will be available on the 19th, followed by Pioneer on July the 3rd, Guide on July the 17th, Trailblazer on July the 31st, and finally Bushmaster on August 14th, also do keep in mind that upgrading to the next rank will cost you adventure coins, and while the prices for the earlier ranks might be pretty cheap at a mere 500 coins, this quickly adds up. For example upgrading from the Trailblazer Rank to the Bushmaster rank cost a whopping 3000 adventure coins. But no need to worry, because as we rank up, the limit on your coins will also go up. So I would absolutely recommend upgrading these ranks the day the become available. Not only do we gain access to more and more of the event shop as we rank up, but also we gain quite a couple of other benefits from passive stats, to weekly rewards, to even new passive effects for when we're out in the mobbing fields. That and these benefits get even more effective as time goes on.

But enough of that lets talk about how to get adventure coins. For players who just start off, you will be able to get 20000 adventure points, which is the equivalent of 200 adventure coins. I mentioned earlier that if you rank up,. Scouts have a daily cap of 250. Pioneers have a cap of 300, Guides have a cap of 350, Trailblazers have a cap of 400, and Bushmasters have a cap of 500. But how are you going to be getting these coins, well the second you start this event, you will be given a passive skill that will allow you to hunt monsters near your level for advenuture coins, spawn enhancers like Kishin, Frenzy or the new Fury totem, will help out tremendously. Good mobbing classes can find themselves capping coins within 15 minutes. However if you don't like the approach of having to hunt in order to cap coins, there are also a bunch of other ways to cap. If you head over to the event shop, you will be able to pick up either a dining chair or a performance chair. By purchasing either of these chairs, you will be able to head over to the canteen, where you can AFK for EXP in a dining chair or Adventure coins in a performance chair. It should also be noted that with each rank up, there are upgraded versions of these chairs that are more expensive, but are more efficient. Additionally many minigames that have been featured in past events are also in rotation. The Legends Return comes back again and features a new character, Wonky the Fairy. Hopefully they've sorted out the issues with latency though because that was not fun to go through during the 14th anniversary. Other minigames will also be popping in and out of rotation every week. These include games like Bingo, Rock Paper Scissors, Decoder, Reverse Battle, One card, and Monsteropoly. Additionally, one of your characters can also participate in adventure prep, this area is located near the right side of the event map, and will take you to a private area where you will be able to hunt as many dummy monsters as you can within 1 minute. You will receive adventure coins according to how many dummies you defeat, which can net you upwards of 100 coins that don't count towards your coin capacity for the day, and if yournot satisfied with how many dummies you defeated, you can choose to not claim the reward and try again! But do keep in mind that this can only be done on one of your characters per world.

Along with these ways of capping coins, we have a couple more things that this event features. Adventure Step Up is a series of missions that you can take on with a new character, and will give you some nice rewards as you level up. These rewards range from Adventure coins, to enhancement items, to even a special title if you complete the final mission. I would absolutely recommend taking advantage of this part of the event especially if your new to Maplestory in general, as it will give you a much needed edge for leveling up faster. Additionally we also have Maple runner, which will test your patience and parkour skills. Along with adventure prep, this is yet another way to get adventure coins after capping. There are a total of 40 different stages, with some stages being harder then others.

Additionally, Brawlosseum is scheduled to be open on July the 3rd and will go on to july the 23th. Do keep in mind that you will have to have your 5th job advancement completed. Anyways this is place is supposedly a battleground where you will be facing off against other players. Eliminating monsters will give you resources to use on exclusive skills against other players. The more I read about this in the patch notes, the more it sounds like monster carnival from the old days so this might be a variation of that. But the important thing to note here is that this is yet ANOTHER way to obtain coins past your daily limit. As when you have played 10 matches, you will recieve 200 coins, though they didn't specify if this was a daily thing so it might just be a one time thing. But what's definitely not 1 time is the weekly rewards, which are distributed every wednesday, which will most likely not count towards daily coin capacity! Additionally, when this part of the event ends, the players in the top 40% of the rankings system that is part of this minigame will receive exclusive rewards, which include a damage skin, mount and different titles, and if you place in the top 5%, you`ll also be given a unique Cash item weapon!

The Adventure Island event is an event that will lead right into the new class, Pathfinder, and for those who are going to be looking to play this new archer, your definitely going to want to take advantage of this event. Tera burning has come back but unfortunately do keep in mind that you will not be able to tera-burn pathfinder. We also have sugar time making a return, so for those of you who want those rewards points, this is definitely something you`ll want to take advantage of. And don't forget that we have a couple of really good sunny sundays coming up, like the 5,10,15 star forcing on July the 14th, and while there is going to be 2 30% off sales that are available in july, I would still reccomend prioritizing rank ups over everything else. This event is one of the first times that Nexon has featured no double coin limit on Sunny sundays, but rather an increasing daily coin limit with each rank up. Just remember the dates in which these ranks actually become available otherwise you might see yourself losing 50 coins for not ranking up sooner.