Reactions: 3,950
Posts: 355
Member
May 2018 edited May 2018 in Suggestions, Feedback, and Requests
It's getting close to a year since the controversial drop rate changes were implemented. Since then we've seen price hikes on valueable items that required drop rate gear for a reasonable drop rate. These changes were met with huge player dissatisfaction and many people quitting.

In 2017 the Maplestory team issued this statement before the patch was due.

We made a promise to keep the community informed ahead of time should balance changes to the drop rate be applied in the Global version of MapleStory.

We have confirmed that these balance changes will be a part of our v188 update. We’re aware of the initial feedback that the community had towards this change and we’d like to share the reasoning behind this decision. Progression for each Mapler is different and this progression was heavily divided by how fast and efficient an individual could farm for items.

From the release of new content, a visible line could be seen between those with a great deal of drop rate gear to those who could not acquire such gear. It is the intention of this change to address this widening gap and the balance of content completion across all Maplers.

With the changes to the balance of drop rate, the formula for drop rate gear will be changed. This means that stacking a great deal of items dedicated towards increasing drop rate will not have the same effectiveness as it does currently.

Again, we know that this will affect our hardcore Maplers who have invested time and resource into acquiring the best drop rate gear. Due to this, there will also be an increase to the base drop rate of highly sought after farmable items such as Nodestones with this update. Additionally, we will do our best to introduce more events with desired items obtained through previous means of farming as rewards.


I'll get into the issue with the statement in just a moment but first I would like to mention that since this update went live over time we have seen more events that allowed players to get nodestones and symbols. Something which was fairly absent prior to these changes. However it is simply not enough.

Based on this statement, it is made clear that the Maple team doesn't fully understand how the gap between funded and unfunded came about. It has a lot to do with the reliance on the cash shop in this game and while there are ways to get certain items from the cash shop that help with progression, as a free player you will never get enough to compete with someone who can swipe the credit card. This is the underlying problem. Nexon has made efforts to close this gap in other ways such as the introduction of the reward point shop and scrolls from elite bosses but it is simply not enough. Cubes probably make the biggest difference and while obtainable in game are not common enough as you need hundreds to create endgame gear. This is especially the case regarding drop rate gear.

If Nexon really wanted to help close the gap they would work on making items such as cubes far easier to get in game allowing the less funded players a chance at getting drop rate gear easily. They could have also changed things so you could get the drop rate % potential lines on unique pot also. Rather than making the necessary changes that would probably hurt their profit margins a little they opted to screw over the players who invested a lot of time and money into drop gear to benefit long term.

Here's a quote by the user Rolls who I think sums things up nicely.

Again with this "evening out the playing field", "decreasing the gap between the rich and poor"
Making it harder for people above you doesn't make it easier for you. Changing the way you see it's not going to change the fact that it will be harder to get nodestones in general. The first general increase will benefit everyone, the nerf will be a huge detriment to those already situated with drop rate. And then prices will start to rise, due to a decrease in supply of nodestones. And then botters will abuse that to profit even more.

That's not even accounting for that even if it was a benefit to less funded players for nodestones, this will lower drop rate to symbols, droplet stones, event items, basically everything important. The drop rate nerf isn't just about nodes. The current system is fine. It doesn't need a nerf.

And Nodestones aren't something that's supposed to be very rare and very valuable. They're something you need thousands of to max out on, at least a few hundred to get to just a decent place with in terms of progression.


He/she is exactly right. Fastforward to 2018 and what was said here is pretty much what has happened in game. Nodestone market controlled mainly by botters, prices on Nodestones have gone up since the nerf. Nodestones more or less harder to get than before, symbol drop rate almost non existent even during 2x drop rate events (which we almost never see anymore), droplet drop rate non existent, event items and quest items drop far less often and much more. I could go on all day.

This nerf didn't "close the gap". It only widened it. All you have now are the rich buying their Nodestones because why not? Funded will always be at the top regardless in this game and shelling out billions to botters selling on the market to get ahead is no issue. There's no point trying to limit that. Less funded now have to deal with higher prices on Nodestones and an even slower progression time. Players are now limited to events, event shops and dailys.

Lets face it. The only reason this nerf was ever implemented is because the developers saw how quickly players were progressing through content and decided to slow us all down. It's a disgusting move but it's the reality. If they were all about closing that "gap" they would have made cash shop items such as scrolls and cubes way more accessible but they didn't. At this point I'd suggest removing the drop rate potential line completely and buffing drop rates across the board as it is and always has been a huge inconvenience to switch gear during fights. There's also the fact that drop rate doesn't affect major bosses such as Lucid for equip drops. The symbol drop rate and the droplet drop rate still needs to be addressed. Nodestones could also use a massive drop rate increase.

Many have posted video evidence after the patch went live to demonstrate how much worse things are as far as symbols and nodestones go. The video below demonstrates how bad the nerf is. Of course this is just 1 piece of evidence out of many. 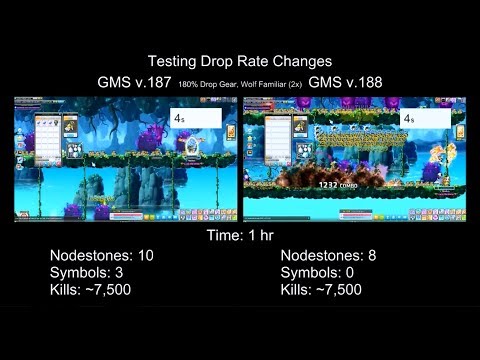 I hope Nexon realises their mistake and makes the necessary changes to bring drop rate values back to what they were before for everyone. Not just the funded. This means they should also remove drop rate potential lines completely. How's that for "closing the gap"?