Sign In • Register
Follow us on
Go to main site
Go to main site
Home › Non-GMS Content Discussion
Sign In • Register
[New Users] Please note that all new users need to be approved before posting. This process can take up to 24 hours. Thank you for your patience.
Check out the v.234 Destiny: Homecoming Patch Notes here!
If this is your first visit, be sure to check out the Forums Code of Conduct: https://forums.maplestory.nexon.net/discussion/29556/code-of-conducts

New character card in CMST that can reach lv 200

Reactions: 400
Posts: 9
Member
August 2021 edited August 2021 in Non-GMS Content Discussion
You might already know that MapleStory China (CMS) has pretty terrible gaming environment, but CMS is the only overseas region that has tespia server client publicly available for download. Fortunately I do have access of playing in CMST so I can share what's new introduced in game here.

So in July 6th, CMS released an announcement about they're going to retire old character card (Yes the same thing introduced here) and revamp it after September 8th. In CMST v172, I can finally experience the new character card, with Lv 100, Lv 150 and Lv 200 options available.


Unlike old pre-leveled character cards, the usage of revamped character cards is different. Instead of creating another character from scratch, you'll have to redeem the "Character growing bonus gift" when using the character card you bought from cash shop, then transfer it to mules you want to get to Lv 200, and use it to rush to Lv 200 by simply using level up scrolls. Either characters created previously or newly created can use it, but burning characters, Zero and new jobs introduced in major updates cannot use - for example, Kain in current Neo update cannot use. 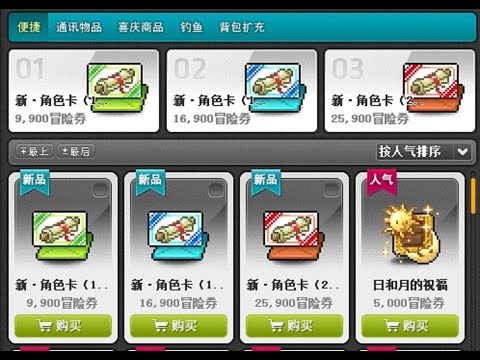 This definitely shocked many players, especially those who spent a lot of time on grinding their own mules for 8k legion. IMO this will ruin the experience of trying characters' skill styles, but using it on characters that's difficult to train seems not a bad option.
Sign In Register
Follow us on