Sign In • Register
Follow us on
Go to main site
Go to main site
Home › Bug Reporting
Sign In • Register
[New Users] Please note that all new users need to be approved before posting. This process can take up to 24 hours. Thank you for your patience.
Check out the v.229 On Air: An Absolute Unit Patch Notes here!
If this is your first visit, be sure to check out the Forums Code of Conduct: https://forums.maplestory.nexon.net/discussion/29556/code-of-conducts

Push/Pull skills fail when others are in the map

Brief bug summary: Skills, that push or pull monsters, sometimes fail to do so when there are other characters in the map.

More details:
Many classes have skills that can push monsters away or pull them towards the character. Most (if not all) of these skills supposedly have 100% chance to push or pull the monsters (up to the count specified by the skill).
These skills do indeed work "as advertised" when the character is alone in the map.
However, if other characters are present in the map, even if they are far away and not moving, the push or pull skills randomly fail, leaving some monsters behind.

I believe this is due to the way the server resolves the conflict between what each character's client is telling it about the monster movement.
This resolution needs to be changed, so that movement due to a skill will take precedence over random movement. 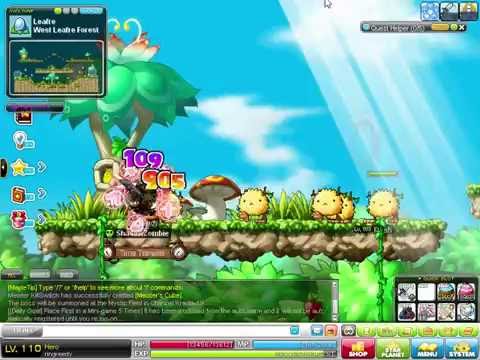 
Steps to reproduce:
1. Be a character with a Push or Pull skill. I will use a Hero for this example. Their push skill is Rush and their pull skill is Combo Fury.
2. Go to a map with enemies that you can't 1-hit, and no other character. Activate Combo Attack. Attack some enemies until you have several Combo orbs spinning around you.
3. Stand on a platform with multiple enemies.
4. Activate Rush. Observe that all enemies in the direction you are facing on the same platform are pushed and move along with you, stopping where you stop.
5. Move a little away from the enemies. Turn to face them. Activate Combo Fury. Observe that all enemies in range of the animation are pulled to you.

Old forums Bug Report thread (which links to more detailed discussion of the history of this bug, if that's of any interest to anyone).