Sign In • Register
Follow us on
Go to main site
Go to main site
Home › Suggestions, Feedback, and Requests
Sign In • Register
[New Users] Please note that all new users need to be approved before posting. This process can take up to 24 hours. Thank you for your patience.
Check out the v.228 On Air: Glimpse of Joy Patch Notes here!
If this is your first visit, be sure to check out the Forums Code of Conduct: https://forums.maplestory.nexon.net/discussion/29556/code-of-conducts

At a first glance :
We used to be able to get various OG items from monster drops, trade quests, and NPC crafting. For example, you have Transparent Claw, Tiger Paw, Bandanas, Korean Fan, Yellow Adventurer Cape (Showa trade quest), Facestompers (NLC craft from an NPC). Only, around GMS's 15th anniversary, players have started to notice that all of these were gone!

At a second glance :
Last month, I’ve fallen on a Reddit thread talking about how to get OG bandanas. In the thread, a level 16x Citizen (Edelstein beginner) from a regular server was explaining how he got a blue bandana drop from low-level orange mushrooms. In the same thread, another person confirmed how they also got different colors of bandanas from snails and other low-level monsters with their explorer beginner. The thread also mentioned how you could get other OG items but again as beginners only.

As a Reboot player, I decided to try it by myself, and I successfully got a yellow bandana from an Edelstein low-level map with a Citizen. I then got my main leeched by a Citizen and successfully got 3 bandanas.

Only my main cannot get said items by itself. So these OG items seem class-locked…

At a third glance :
Today, I got back into my Windia (now Aurora) DB to try some NX I have there. It’s a level 38 character. I was killing some Octopus near Kerning City and then… I got a red bandana drop. This within 2 minutes or so.

So I then started to think. Weren’t OG items class-locked? The only reports of such drops are from this beginner's Reddit thread. People were even pretty hyped when they discovered this, so we would long know if they would drop for any class. After all, people always make new characters for Legion or Link Skills.

So I went back to my main in Reboot which is a Night Lord. I’ve farmed at the same map for I don’t know how long but got nothing. My main has maximum drop rate + familiar. My Aurora DB has nothing. 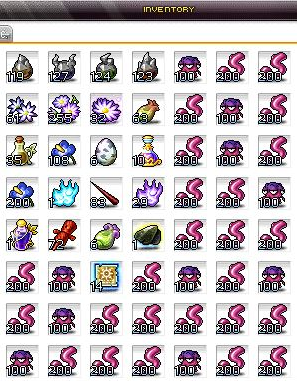 So now, knowing this and how Nexon's income from Reboot is based on NX items, I am starting to make some really unpleasant theories in my head.

And the wipe of OG items seems to continue because with the Ninja Castle recent change, 1 of the merchants in front of the castle is gone (bye-bye Shinobi Bracer, etc.).

Nexon has recently apologized to its players because of its lack of transparency and because of its rigged system. So I am asking you, can you please provide answers to all of this?

The situation, the way it is right now, it's quite annoying because you never know if you're wasting your time or no. Last summer, I was looking for the Yellow Adventurer cape it was said online that you can get it via the Showa Trade quest. I've asked Nexon via tickets if the Yellow Adventurer cape is still obtainable. After insistence from my side and investigations on Nexon's side, they finally answered me that yes, the cape is still obtainable in Reboot. But they categorically refuse to tell me where I can get it. They told me to discuss it in their official forum and in their official Discord. Trust me, I've tried this before, after, and ever much more than just that. I've farmed over 50k Ghost Hairbands for the Showa Trade quest and I got nothing. At this point, I could not even know if I was wasting my time or no. Like what's going on? I find the situation in the game really frustrating for players.