Sign In • Register
Follow us on
Go to main site
Go to main site
Home › General Chat
Sign In • Register
[New Users] Please note that all new users need to be approved before posting. This process can take up to 24 hours. Thank you for your patience.
Check out the v.234 Destiny: Homecoming Patch Notes here!
If this is your first visit, be sure to check out the Forums Code of Conduct: https://forums.maplestory.nexon.net/discussion/29556/code-of-conducts
«12345» 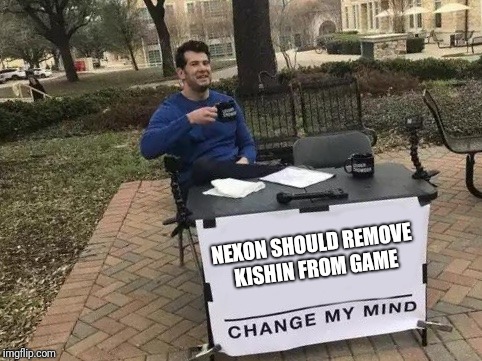 Edit:
Sum of the repeated suggestions in those threads, my favorite is the first idea, while the last one shouldn't exist but was suggested so still summed up:
1)First of all just increasing the base spawn rate and mobs will be enough and then the frenzy/kishin should just hit the cap of spawn rate and mobs, for example now the kish and frenzy give around x2-3 rates(that means x2-3 mobs and spawn rate, not sure whats the cap of monsters in map and seconds per spawn) , it should give just x1. 5+- and the base should be x1. 5 than currently , that would be fair for both sides.
2)make the kanna link skill as kishin
3)make decent skill kish
4)in reboot some suggested to make frenzy for week buyable for mesos , most of them forgot about normal server so then normal worlds should also get it for maple rewards(so it will be fair)
5)remove both kish and frenzy and change spawn rate and mob count
6)remove both kish and frenzy without any change (x)