Sign In • Register
Follow us on
Go to main site
Go to main site
Home › Suggestions, Feedback, and Requests
Sign In • Register
[New Users] Please note that all new users need to be approved before posting. This process can take up to 24 hours. Thank you for your patience.
Check out the v.234 Destiny: Homecoming Patch Notes here!
If this is your first visit, be sure to check out the Forums Code of Conduct: https://forums.maplestory.nexon.net/discussion/29556/code-of-conducts
«12»

Premium Surprise Style boxes have over 100 different item that are Mostly Junk and have no stats/set effects.

Now Premium Surprise Style boxes cost 3,400 and have over100 items that are mostly junk.

Royal Maple Style costs 2,200 NX and have NO junk items at all + the items come with a set effect if you equip them together that grants for ex: +3 All stats and 3/5 M.Att/W.Att
(Now royal maple style, has no junk items at all in it and a set effect to boot ) ( i know NX = More Power, but from a logical standpoint, if your'e gonna spend money might as well get the most out of it, + it's only such a small boost 3 all stats and 3/5 Att won't make a huge difference even for the most funded players. )

*And don't forget that everyone in MapleStory can get his hands on this "Powerful Items" ( also because it has more valuable items and no junk in it so more % chance to get it, and you only get the set effect if you equip the entire set. ( individual items don't have stats on them, only set effects ) 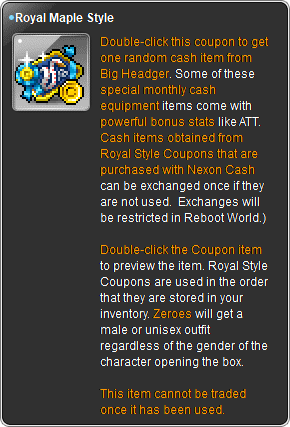 i don't know about you, but i'd rather spend 2.2$ for a 100% Chance to get at least 1 item that i desire and have a set effect with that, then to spend Gamble 3.4$
from a selection off over 100 items, which mostly consists of Junk Items, don't get me wrong you also Will gamble money on royal maple style but it doesn't have any Junk Items at all!

so while you can get the same item twice, at least it's a desirable item that you can resell, or equip on a mule/2nd main.

( you would still get tons of money nexon, but people won't feel like they spend over 100$ just to get junk items. ( it's all only the items are desirable )

*Sorry for the overuse of italics, i used that to emphasises

Also some items to get them you have to put whatever items you'd like to reroll for them in a sewing machine ( the pink one gives out tradeable items, and the purple one gives untradeable, but it costs less )
(i also Strongly suggest implementing Perm NX ( insted of our 90 Day NX in the cash shop, KMS has only Perm NX )

This is the Sewing Machines: 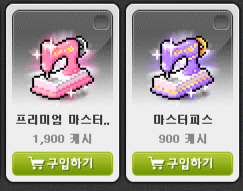 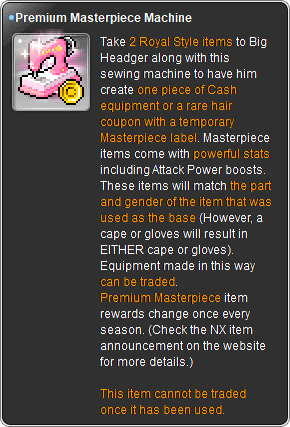 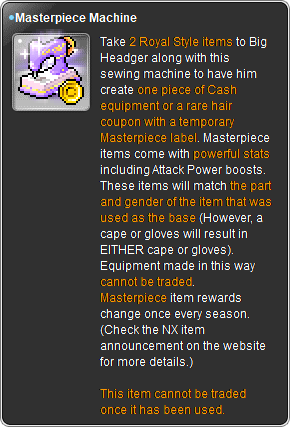 Here's a video that demonstrates how to use the masterpiece sewing machine:

Here's 1 set that you can get from the sewing maching in KMS, called The Master Blood:

And other sets such as: Lucid set, Shadow warrior, and Gothic boy/girl ( the death's scythe set )

*You get the set by putting 2 Speciel Label Perm nx into a sewing machine, then you can either get the same items but with better stats, or a Master label items which has even more stats; Like the Master Blood set ( which is a Master Label Tier )

* Speciel label items and Master Label items have a set effect which can give up to 15 all stat and 10 att/m.att upon wearing the entire set pieces
* and also has temporary stats that last for 90 days, but the equpi itself is permanent.

For example here is the Master blood set in KMS, in a Master Label Tier: 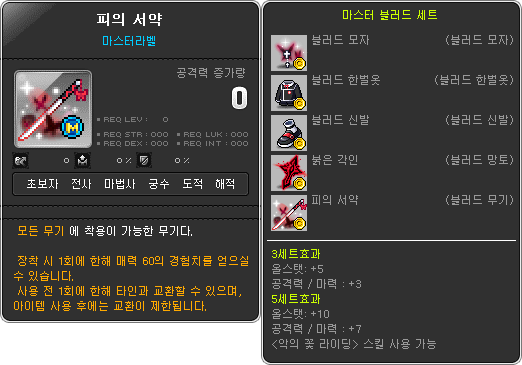 and here's the same set in it's reboot version: 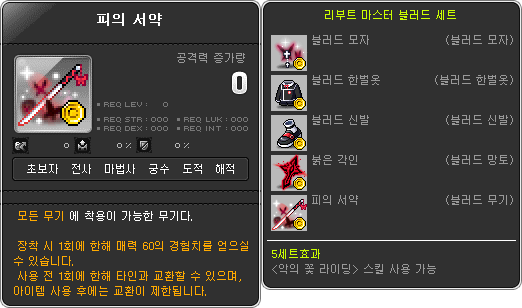 *BTW: the last option on the set effect is either: a Mount,or a chair.

Here's the prize for getting all the set pieces, it's either a chair or a mount, i'm not sure: 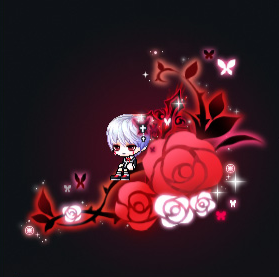 And for anyone who's worried about everyone in GMS looking the same becuase nx have set effects, don't be, look at KMS, No one looks a like there, and they have NX with set effects and ( 90 days stats )

Master Label Items ( yes with a set effect that gives stats, i think it's a fair trade between the players and nexon, we get perm nx in the cash shop, and less junk items,and nexon get money from us, rerolling, or just buying a sewing machine to put 2 Speciel Label items for a chance to get: Red,Black,Master Label Items )

Read Daxterbeer's and my comment's on the second page for further info.