Sign In • Register
Follow us on
Go to main site
Go to main site
Home › General Chat
Sign In • Register
[New Users] Please note that all new users need to be approved before posting. This process can take up to 24 hours. Thank you for your patience.
Check out the v.233 Destiny: Remastered Patch Notes here!
If this is your first visit, be sure to check out the Forums Code of Conduct: https://forums.maplestory.nexon.net/discussion/29556/code-of-conducts
«12»

Reactions: 1,960
Posts: 34
Member
June 2018 edited June 2018 in General Chat
After giving the patch notes a few looks over, it has come to the attention of many Reboot players that sources of Event Arcane Symbol Selectors are being severely limited in the Reboot world.

The first source is from the ARK Event Coin shop. In previous event shops, since symbols in these shops were introduced, both Reboot and non-Reboot worlds were able to purchase 20 of a particular arcane symbol per week. We've also had 2 Rainbow Spectrum events, 1 Sunny Sunday, and a couple of the ARK pre-events where both types of worlds received Arcane Symbol Selectors. For whatever reason, this seems to have changed with the ARK event. Listed in the patch notes one can find:

Unless this is a typo or oversight, this is a rather inexplicable method of gating progression on the Reboot world.

The second source is from the Maple Relay event. This is a reskinned Play V/TakeOver/Super Nova event with for the most part the same tiered rewards as usual. However, for the Tier 2 cumulative achievement box there is a stark difference in rewards:

Reboot usually receives the 30 Mysterious Meso Pouches in place of 5 Golden Apples and the Lil Dark Angel Wings, however, Arcane Symbol Selectors aren't a class of item that is exclusive to non-Reboot worlds. There is no reason as to why the Reboot reward shouldn't either be replaced with or include the same amount of Arcane Symbol Selectors. This could be a matter of just copy-pasting older rewards and not recognizing the fact that Symbol Selectors are available in Reboot, however, if it is intentional there ought to be some sort of explanation given.

Don't take our Arcane Symbol Selectors away, please and thanks. (Losing 175 total symbols is a lot) 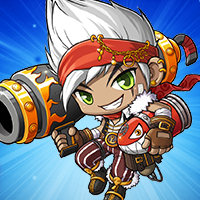