Sign In • Register
Follow us on
Go to main site
Go to main site
Home › Suggestions, Feedback, and Requests
Sign In • Register
[New Users] Please note that all new users need to be approved before posting. This process can take up to 24 hours. Thank you for your patience.
Check out the v.232 Blooming Forest Patch Notes here!
If this is your first visit, be sure to check out the Forums Code of Conduct: https://forums.maplestory.nexon.net/discussion/29556/code-of-conducts

Reactions: 575
Posts: 26
Member
January 2019 edited January 2019 in Suggestions, Feedback, and Requests
So I recently opened up some Damage Skin boxes from the Alliance shop and got my hands on one Foggy Damage Skin (Unit). I knew what unit damage skins were like in KMS, so I was interested in seeing how they ended up porting it over to GMS. And... well...

To give a really simplified explanation: 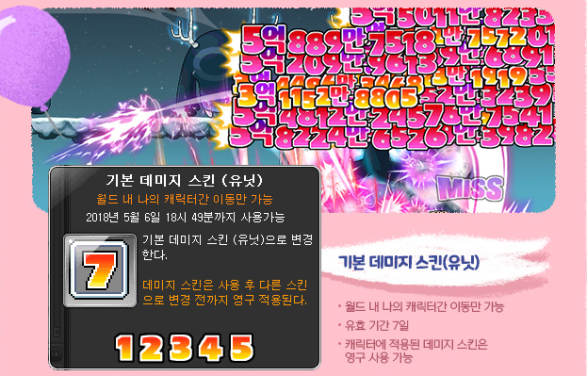 So, uh, yeah, it would be nice if you guys could come up with a better way to handle unit damage skins instead of leaving this as is.