Sign In • Register
Follow us on
Go to main site
Go to main site
Home › General Chat
Sign In • Register
[New Users] Please note that all new users need to be approved before posting. This process can take up to 24 hours. Thank you for your patience.
Check out the v.219 Awake: Flicker of Light Patch Notes here!
If this is your first visit, be sure to check out the Forums Code of Conduct: https://forums.maplestory.nexon.net/discussion/29556/code-of-conducts
Closed

trying to create a perma beginner?

Reactions: 400
Posts: 23
Member
July 2017 edited July 2017 in General Chat
Hi everyone. I'm trying to make a perma beginner, but I'm stuck.
A while ago all of my characters were deleted because I wasn't able to migrate my account on time. Big tragedy, cried real tears, etc. This was a while ago, and I've since started playing again with the motivation to just re-create some of my favourite characters from scratch because I just enjoy the game so much.

One of my chars was a lvl 80 perma beginner. I tried to remake her yesterday, but unless I'm doing something wrong, it seems stat distribution is locked until I pick a first job. 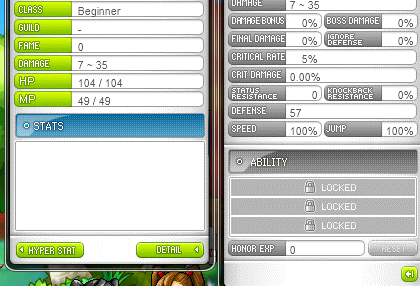 I've tried leveling up to lvl 10 to see if that made a difference but it didn't. The internet has no info at all since I don't think there are many people with the same problem as people either still have all of their characters, or stopped playing.

I'd be really sad if they changed something that makes it impossible to use your stats unless you pick a job. In that case, is there a way I'm still able to play a perma beginner? It was honestly one of my favourite characters to play.