Sign In • Register
Follow us on
Go to main site
Go to main site
Home › Contests and Events
Sign In • Register
[New Users] Please note that all new users need to be approved before posting. This process can take up to 24 hours. Thank you for your patience.
Check out the v.227 MapleStory X BUGCAT CAPOO Patch Notes here!
If this is your first visit, be sure to check out the Forums Code of Conduct: https://forums.maplestory.nexon.net/discussion/29556/code-of-conducts
«12»

Howdy, Maplers! We're nearing that exciting part of the year and there's a lot of new upcoming content that we want to share with everyone. However, with so many Maplers spread around the world and us being located in Southern California, we've kept a large portion of our interactions with Maplers behind the screen. Due to this, we wanted to open up an opportunity that's more personal and memorable to those who can attend.

Come hang out with the MapleStory team, community guest stars, and various talents for this special occasion!
Please see the rules and information of this event below:

- The event will be taking place on: November 17, 2017 (Optional November 18th event as well!)
- The event will take place at: El Segundo, CA
- Participants must be 18 years or over to apply
- The sole responsibility in regards to transportation and arriving at the venue is on each participant (try not to be late!!!)
- Additional information and details of the event schedule will be provided to applicants that are selected
- Applicants that are selected will be added onto our guest list. All individuals who aren't on the guest list, but show an appearance at the venue will be escorted out. 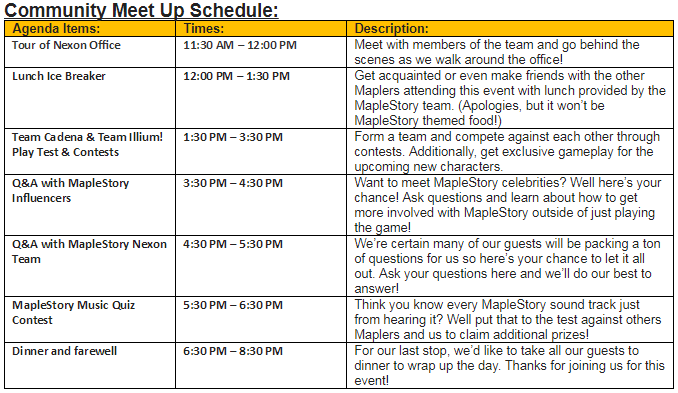 Please note that the applications are now closed.
Complete your application here: https://www.surveymonkey.com/r/JHV68KR

MisusingTV: https://www.twitch.tv/misusingtv
"I'm really looking forward to meeting everyone who will be attending and let's have some fun!"

MechSoySauce: https://www.twitch.tv/mechsoysauce
"I can't wait to see all the Maplers and see what events Nexon has in store for us at their HQ!"

Kiki Kabuki: https://www.facebook.com/OfficialKikiKabuki/
"Are you pumped for the meet-up? So am I!! I really can't wait to meet you all and have a blast together! See you there real soon!" Can't wait to see you there!
Arwoo & the Community Team